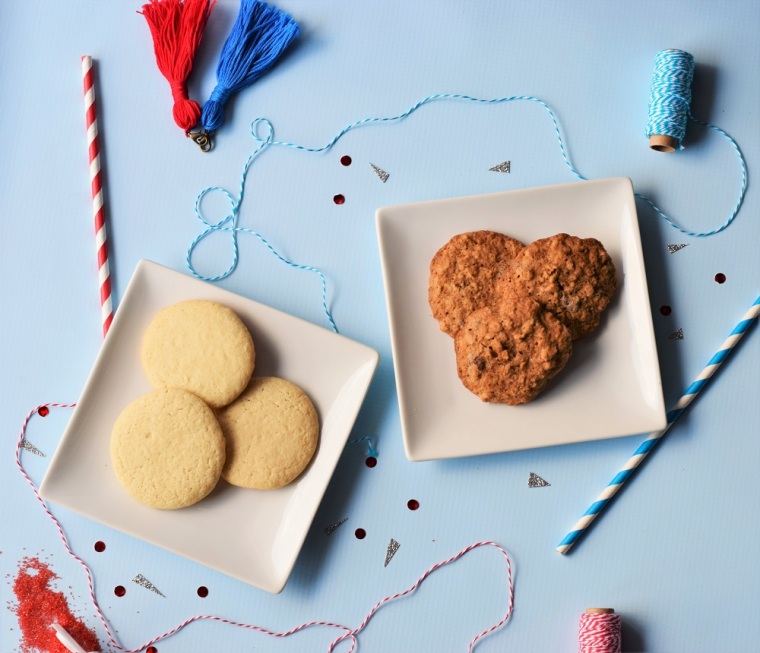 Am I the only one who was completely unaware of the second most important voted upon contest of 2016? Every election year, starting in 1992, the “competing” first ladies from the Republican and Democratic parties each submit a cookie recipe that the public can vote on. A truly all-American bake off! It’s called the “Presidential Cookie Poll”.

Interestingly enough, the first bake off occurred between Hillary Clinton and Barbra Bush in which Hilary submitted the “Hillary Clinton Chips” recipe and Barbra submitted the “Barbra Bush’s Batch” recipe. In my opinion, neither won out for creativity on the names, but taste testers voted Hillary the winner with her overall standard looking chocolate chip cookie recipe with added oats for texture. She won again in 1996. In 2016, a Clinton is back at it, but this time it’s Bill!

For 2016, Bill Clinton resubmitted the family’s winning recipe under the name “The Clinton Family’s Chocolate Chip Cookies”, and Melania Trump submitted her “Star Cookies”. Again, not so creative on the naming schemes, but you can’t help but be curious as to which cookie really reigns supreme! I decided that I had to test out both recipes and report back to y’all with my thoughts.

I would like to note that this post does not include any opinion about my political views or what I think about the candidates and their spouses. This is 100% a cookie baking endeavor where fats and sugars complete for my affection! Purely a taste-bud popularity contest. BUT – MAKE SURE TO GET OUT THERE AND VOTE, PEOPLE!

Without further ado, here are the recipes:

2. Combine the shortening, brown and white sugars, and vanilla in a separate bowl and beat on medium speed until fully creamed. Add the egg and beat until well incorporated.

3. Gradually add the flour mixture and the rolled oats, mixing just until incorporated to form the dough. Last, stir in the chocolate chips by hand.

4. Drop teaspoons of the dough onto baking sheets, spacing them about an inch apart. Bake for 10 to 12 minutes or until slightly browned. Cool the cookies on the sheets on a cooling rack for 2 minutes, and then transfer the cookies directly to the cooling rack.

1. Combine flour and baking soda in a bowl.

2. In a separate bowl, combine the butter and sugar and beat on medium speed until fully creamed. Add the egg yolk and white one at a time, beating on medium speed after each addition, until smooth and well incorporated.

3. Slowly beat in the sour cream and the flour mixture, just until a soft dough forms with no trace of flour left. Using two pieces of parchment paper, sandwich the dough between them and roll to an even thickness of 1/8 inch. Place on a baking sheet and refrigerate or freeze for at least 30 minutes, or until firm.

4. Preheat the oven to 350 deg. F. Line baking sheet with parchment paper. Remove the top sheet from one half of the chilled, rolled-out dough. Cut out as many stars as you can, transferring them to a baking sheet as you work (spacing the cookies 1 inch apart). Once the dough begins to soften and becomes hard to work with, pop it back in cold storage. Re-roll scraps, as needed.

5. Bake for 7-8 minutes, or until the stars are just beginning to brown on the edges.

6. Transfer the baking sheet to a wire rack; cool the cookies completely (on the sheet) before serving or storing. 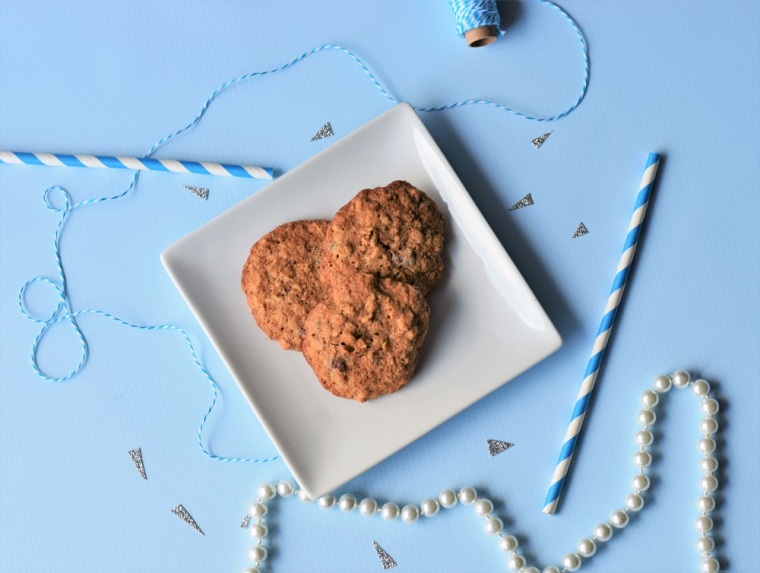 Like I said above, the Clinton’s recipe is a pretty standard chocolate chip cookie. The Clinton’s use vegetable shortening instead of my preferred butter. The recipe also calls for less white sugar in comparison to light brown sugar, and the addition of rolled oats which makes the cookie chewier. Thus, we end up with a chocolate chip-oatmeal cookie hybrid which I quite liked. The flavors were all there, and the texture, even a day later, was chewy and light.

It’s important to note that it is essential that you leave the cookies on the pan for the two minutes to let them solidify since they are quite gooey and delicate. I actually had varying success with different pans and bake times. 10 minutes on a light pan resulted in very flat cookies that were nearly impossible to get off of the pan in one piece. I baked them another minute the next time around and they were easier to pry off. On a darker pan, however, the cookies puffed up a bit more like a traditional cookie, and the difference between 8 and 10 minutes of baking just added a bit of crispiness depending on how you like your cookies. I recommend 8 minutes on a dark pan. 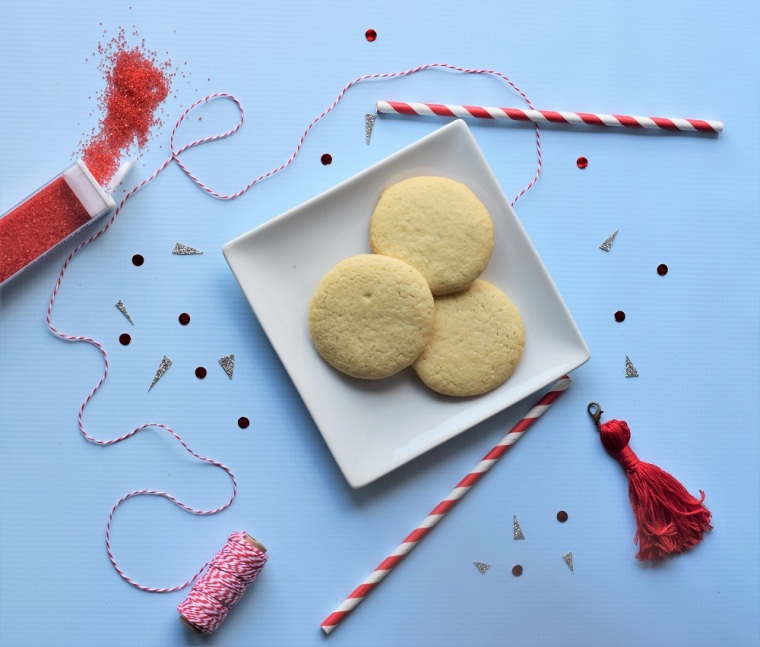 Melania displayed her Eastern European heritage in submitting this cookie recipe containing sour cream. It is essentially a sugar cookie that is crunchy on the edges and chewy in the middle. Though the star shape was traditional, I had an oddly difficult time finding an appropriately sized star cookie cutter. Instead, I cut out small circles. I suspect that this recipe would have resulted in crisper corners and a softer middle center if you use the star shape.

The round cookies had crisp edges with a very chewy center, making for a lovely cookie texture. Though I liked the soft and tender crumb of these cookies, the flavors left me wanting more. A simple addition of a pinch of salt would have helped the flavor a lot, and I would not have complained about 1/2 teaspoon of added vanilla extract. Alas, I ended up with many bland sugar cookies that I ended up smearing lemon curd on top of to give them some excitement.

I have to agree with the people, the Clinton Family Chocolate Chip Cookie recipe is the winner! The nuttiness of the oats mixed with the chocolate chip cookie base had me reaching for cookies one after another… like I actually taste tested four cookies the day I made them.

But don’t just trust me, try them for yourselves and let me know your favorite! If you’re hosting an election day watch party, these would be perfect for dessert – plus your guests could vote and have their own deliberation. This cookie contest has correctly predicted the winner of the presidency five out of the six elections it has been a part of… will it be correct again?

Hiiiiii! 👋🏻 I made these PJs over the weekend, and I plan to essentially never take them off, thanks.
You know it’s a good sewing project when you put it on immediately after finishing the last seam ❤️ ready for cozy Christmas nights in these perfect jogger pants (sewing pattern on the blog from way back). I may like these better than the original! #sewingpattern #joggerpants #christmaspajamas
Somebody *cough cough* left you hanging last week, but this cutie shirt jacket is done!!! The oversized fit is so cozy for fall, and I’m totally obsessed with the organic flannel I used from @fabricateboulder. I made this pattern exactly as written in a size small, but using the length of the medium to make it longer. Hilariously enough, this fits Kyle like super well, minus the sleeve length, so I might just have to make him one too 😂 hope you’re gearing up for Halloween weekend fun!
Trying something new over here!! I’ve gotten really into trying to sneak more protein into my diet, and my latest favorite (made it at least 4 times this month) is this pumpkin pie protein shake! Seriously delicious, you’d never know it was actually pretty healthy. Recipe below!
How I’ve held out until now on the pumpkin baked goods is a mystery. But we’re here now, don’t worry. 🎃 I use this pumpkin bread recipe for muffins, with a Nutella swirl, and with cream cheese frosting to make cupcakes. Truly so easy and versatile! Hardest part is finding a grocery store with pumpkin in stock. 🙃 Recipe on the blog archives! #pumpkinmuffins #pumpkineverything #fallrecipes
While I was at a friends bachelorette, the #valdiviasweater pattern was released and I can’t wait to share it with you!! This was my first time getting to test a pattern, and it just so happened it was a shape I had been dreaming about making myself. This came together so quickly, even with my alterations adding the color blocking. This pattern is out just in time for sweater weather, plus it comes with a handful of variations and great instructions for beginners. Absolutely recommend, great job @alissahthreads! 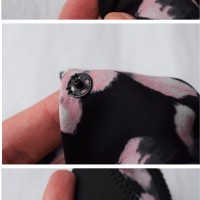 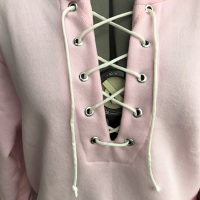